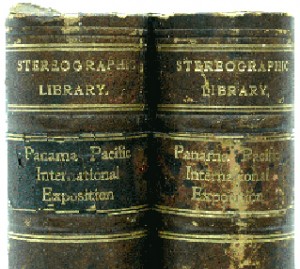 An interesting revelation … for about 15 of the last 40 years accumulating the Keystone set of stereographs or stereo views, I have been viewing those with The “Perfecscope” … a brand of  “Stereoscope”.  This is the Trademark used for its USA Patent dated Oct.15, 1895 (updated June 3, 1902).  Engraved on the device are other countries recognizing the “Perfecscope” Trademark (Canada, France, Germany, Great Britain, Austria and Belgium).  The device bears a recessed/stamped emblem indicating that this brand was awarded during the “Exposition Universelle – 1900″ in Paris – and also bears the inscription: “H.C. WhiteCo”.

“The Exposition Universelle of 1900 was a world’s fair held in Paris, France, from 15 April to 12 November 1900, to celebrate the achievements of the past century and to accelerate development into the next. The style that was universally present in the Exposition was Art Nouveau. The fair displayed, in view of over 50 million people, many machines, inventions, and architecture that are now nearly universally known, including; escalators, the Eiffel Tower, Ferris wheels, Russian nesting dolls, Diesel engines, talking films, and the telegraphone (the precursor to modern-day sound recording).”

While the ‘updated’ 1902 date precludes this Stereoscope from being in use during the 1900 Exposition, it may well have seen use viewing Stereographs (or Stereo views) during the 1915 PPIE.

Per the great Resource:  http://www.exploratorium.edu/history/PPIE-3D/

scanned images of the entire set of 100 Stereo View Cards can be found.  Their website states:

“In 1915 the city of San Francisco invited the world to celebrate the opening of the Panama Canal with a world’s fair, known as the Panama Pacific International Exposition. The occasion was also a celebration of the city’s recovery from the 1906 earthquake and fire. The Exploratorium is housed in the last remnant of the Exposition, the Palace of Fine Arts. Without the media of today, its promoters had to find other ways to publicize the event. Thanks to the Keystone Company, people all over the world were able to experience a day at the fair by looking at the stereograph pictures through special viewers that created the 3-D effect.

In the early 1900’s the Keystone Company produced hundreds of thousands of stereographic images. Keystone organized some of the images from its collection into sets of 100. The stereographs on this website are from the set titled “The Panama Pacific International Exposition.” We have scanned the original stereographic pairs, and used Adobe PhotoShop® to convert the images to anaglyph format. ”

The Jamieson Collection has accumulated 80-85% of the full keystone PPIE set.  All 100 Stereo Views are listed, the Stereoviews present in the Collection are shown in Blue.
Click Here to View the list

PRICE VALUATION … Each Stereo View Card, depending on Condition and Subject Matter

PRICE VALUATION … Each Glass Slide,  depending on Condition and Subject Matter

Magic Lanterns, also known as optical lanterns, provided one of the most popular forms of entertainment during their heyday in the 18th and 19th centuries, establishing many of the first 2-D special effects. Using an artificial light source and a combination of lenses, these devices enlarged small transparency images or miniature models and projected them onto a wall or screen. While most magic lanterns were designed as simple wooden boxes fitted with a handful of precision brass parts, a few were ornately decorated with exotic painted scenes or engraved metal casings.