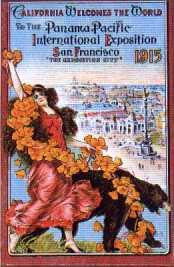 A Sense of Wonder …

Think of it – just nine years after the devastating 1906 earthquake, San Francisco staged the 1915 Panama Pacific International Exposition, celebrating the opening of the Panama Canal in August, 1914 and showing more than 18 million visitors from around the world that it remained “the city that knew how.”  Understandably, the universal reaction of fair-goers was “a sense of wonder.”

The building of the canal itself was, of course, an incredible feat: Over 50 years in the making, it was dubbed “The 13th Labor of Hercules.” And so was the creation of the Exposition, beginning with the placement of 300,000 cubic yards of fill to create land for the 635 acre site from what had formerly been San Francisco Bay and is now San Francisco’s Marina district.

The times were heady, and rapid strides were being made in engineering and manufacturing … crowned by an Italianate main tower known as the Tower of Jewels, the most exquisite and dazzling feature of the Fair.  This 435 foot Tower was adorned with 102,000 glass gems (Novagems, in the parlance of the period) that sparkled when swayed by the wind, illuminated at night by the Electric Scintillator.  This miracle of technology stood against the sky behind the Exposition, and produced, by a searchlight battery of thirty-six great projectors, mounted on the breakwaters of the Yacht Harbor, a multi-colored fan of enormous rays of light.  It was manned nightly by a company of Marines, who manipulated the fan of lights in precise drills!

This Herculean production with its monumental Exhibition Palaces earned its Legacy … The World’s Last Great Fair.