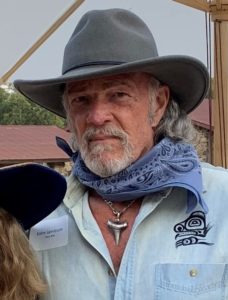 Inspired by wonderful accounts of that Great World’s Fair even as a child, charmed by the stories my ‘Grandma Maud’ related, I began my romance with the Expo at an early age.  An Orange County native,  Vietnam Veteran and CSUF Business Major, I had been a business owner for several years when ‘Grandma’ presented me with that near-flawless Novagem from The Tower of Jewels, a framed hand-tinted picture of The Palace of Fine Arts, a handsome viewbook and several other of her souvenirs.

The Lure of the Panama Pacific International Exposition was inescapable.  In the Awards and Engraving business full-time, attending University classes full-time, my ‘third job’ was the most fulfilling – to stock my ‘Sierra West’ Antique Store in Old Town Tustin,  I would head out across five western states loading my trailer with everything from wagons and windmills to watch fobs from the Great Fair.  I searched huge antique shows, local auctions, flea markets and small town antique stores, establishing ongoing contacts with dealers and pickers;  my Collection began to take shape.

Perhaps, though not the most prolific, the years before the Internet were certainly the most charming time amassing my Collection.  I discovered and bought out an entire warehouse that contained tens of thousands of early 20th Century lithographs;  among them were early James Fraser  ‘End of the Trail’ and Cyrus Dallin lithographs, inspired by statuary at the Panama Pacific.  To market my ‘warehouse find’, I advertised in ‘The Antique Trader’ and ‘The Collectors News’, at the same time, ‘mining’ these tabloids for Exposition items to build the Collection.

While many collectors aspire to limit the ‘categories’ they collect, from early on (and something I am very thankful for) I elected to literally search out and obtain good quality items from across the full spectrum of what the Panama Pacific had to offer.  I attribute this to my experiences visiting scores of local, state and National Park visitor centers and museums.  While on my wide buying sojourns, I would stray hundreds of miles into neighboring states to tour the West’s fantastic natural wonders, its National Parks and Monuments, the intriguing ghost towns and attractions, picking up PPIE items along the route.

With the advent of the Internet, online auctions and eBay … the spectrum of resources blossomed!  I began organizing the Collection about the time that my home began to resemble one of those museums!  Much as a museum or university or historical archive would assemble and categorize collections, I began to accumulate booklets, pamphlets, hardbound books and notes of what other PPIE items existed.  It became evident that my Collection had become my avocation and, to an extent, my investment portfolio.

Along this trail I built an awards and promotions business, became a father, a Reserve with the Orange County Sheriff’s Department after ‘9-11’, and a then a grandfather.  And the entire time, I doubt that I ever had a single week in which I was not involved in searching for pieces to improve this fascinating Collection.  It can be said that I helped build this small piece of ‘Pan Pac’ history … and that ‘Pan Pac’ helped build a piece of my own history.