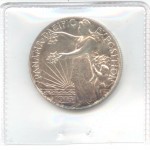 The 1915 Panama Pacific Half Dollar represented only the second commemorative silver half dollar issued by the United States Mint. Although this would later become the most frequent denomination for classic commemorative coins, the earlier issues took place across a range of denominations. The program of five commemorative coins issued for the Panama Pacific International Exposition including two versions of a $50 gold piece, a gold quarter eagle, and a gold dollar.

The half dollar featured the full length figure of the allegorical Columbia with rays of the sun and the Golden Gate Bridge in the background. Her arms are outstretched to scatter fruits and flowers. A cherub appears to her right holding a cornucopia. Inscriptions read “Panama Pacific Exposition” and the date “1915″. The obverse includes the “S” mint mark, as the coins were produced at the San Francisco Mint facility. 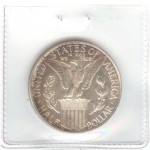 The reverse of the Panama Pacific Exposition Half Dollar features an American Eagle with wings outstretched, perched on a shield. An oak branch and olive branch appears to each side to represent strength and peace. The words “In God We Trust” appear near the eagle’s head, representing the motto’s first appearance on a commemorative coin. The additional inscriptions “United States of America” and “Half Dollar” surround. The obverse of the coin was designed by Charles E. Barber, and the reverse was designed by George T. Morgan.

Despite the higher authorized mintage of 200,000 coins, net distribution after melting was only 27,134. The gold commemorative issues struck for the Panama Pacific International Exposition sold a proportionally large amount of their maximum mintage. The 1915 Panama Pacific Half Dollar were sold for $1 each, or included in combination offers for four coin sets, five coin sets, or double sets incorporating all issues of the commemorative coin program. 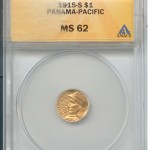 The Panama Pacific International Exposition was held in 1915 to mark the opening of the Panama Canal and the rebuilding of San Francisco following an earthquake and fire. A program of five commemorative coins struck in gold and silver were authorized to mark the event.

The Panama Pacific Exposition Gold Dollar was the smallest sized gold coin of the program. The obverse design featured the head of a Panama Canal laborer wearing a cap, with the words “United States of America” before him and the date “1915″ below. The reverse design depicts two dolphins circling the denomination “One Dollar” with the words “Panama Pacific Exposition San Francisco” around the edge. These designs were created by Charles Keck. 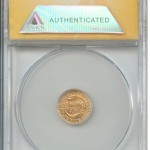 Commemorative coins were distributed by Farran Zerbe through his management of the Coin and Metal Department. Individual examples of each of the five issues were available, as well as four coin sets, five coin sets, and double sets. The individuals were sold within envelopes, while the sets were placed in leather or copper and glass display cases.

The 1915 Panama Pacific Gold Dollar was sold individually at a price of $2, the same price as the next most recent commemorative gold dollar issue. From the maximum authorized mintage of 25,000 coins, net distribution after melting was 15,000. 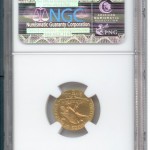 The Panama Pacific Exposition Gold Quarter Eagle was one of five different coins authorized to mark the international exposition held in San Francisco, California. The coins included two different $50 gold pieces, one $2.50 gold quarter eagle, one gold dollar, and one silver half dollar.

The obverse design of the quarter eagle features an image of Columbia, seated on a mythical creature known as the  hippocampus, with a caduceus in her left hand. The hippocampus, which has the head of a horse and the tail of a dragon is intended to represent use of the Panama Canal, while the caduceus represents triumph over yellow fever during the canal’s construction. An inscription appears above “Panama Pacific Exposition” with the date “1915″ below. 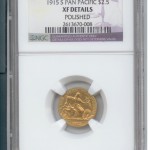 An American Eagle perched on a stand is pictured on the reverse of the 1915-S Panama Pacific $2.50 Gold Coin. The stand includes the motto “E Pluribus Unum” with the denomination expressed as “2 1/2 Dol” below and “United States of America” above the eagle. The obverse of the coin was designed by Charles E. Barber, while the reverse was designed by George T. Morgan.

The Panama Pacific Quarter Eagles were limited to a maximum mintage of 10,000 coins. After some were returned for melting, the net distribution was 6,749. The coins were originally offered at $4 each, or as included in four or five coin sets issued during and briefly after the exposition. The coins were distributed by Coin and Medal Department, under the management of Farran Zerbe.

The lowest mintage and rarest commemorative coin of the United States is the 1915 Panama Pacific Exposition $50 Gold Piece. Available in both round and octagonal versions, the high denomination of the coins recalled the Humbert $50 slugs that were created in San Francisco during the gold rush. The coins were issued for the Panama-Pacific International Exposition held in San Francisco.

The obverse of the Panama Pacific Fifty Dollar Gold Coin features the head of Minerva, the goddess of wisdom, skill, contemplation, spinning, weaving, agriculture, and horticulture. Inscriptions include “United States of America”, “Fifty Dollars”, “In God We Trust”, and the date 1915 expressed in Roman numerals as “MCMXV”. The reverse of the coin features an owl, the symbol of wisdom and an animal sacred to Minerva. Inscriptions read “Panama Pacific Exposition” and “San Francisco”. The octagonal version of the coin has dolphins encircling the edge to represent the uninterrupted waterway created by the Panama Canal. The designer of the coin was Robert I. Aitken.

Sales of the $50 gold coins took place individually or as part of sets encompassing all of the Panama Pacific Exposition commemorative coins. Individual sales took place at $100. A combined offer for a four coin set (choice of octagonal or round) was also available for $100. Following the exposition, the five coin sets were available in special copper and glass frames for $200. Double sets were also available for $400.